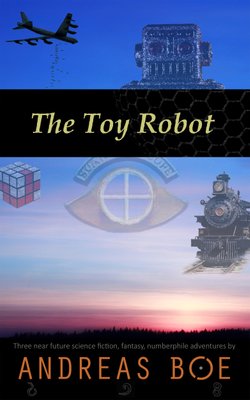 The Toy Robot is the fourth book in the Nerdology series.

It is a collection of three short stories: The Toy Robot, The Ring Thing and The Lost Void.

The first is a natural continuation of The Gray Case. The Ring Thing is a sequel to The Key Ring, and the Lost Void makes use of some of the ideas found in The Wasp Nest.

When I wrote The Toy Robot I wanted to return to the more down to Earth type of action found in The Key Ring. The theme this time came to be conspiracy theories inspired by the Cold War, combined with number puzzles.

It was written in only three months, including illustrations and development of mathematical ideas.

Grandpa wonders if M has given Mikko any subtle hints. Has she?

What is the mathematical curiosity hidden in the cheezy poem?

Why is the toy robot puzzle creator so obsessed with hexadecimal numbers?