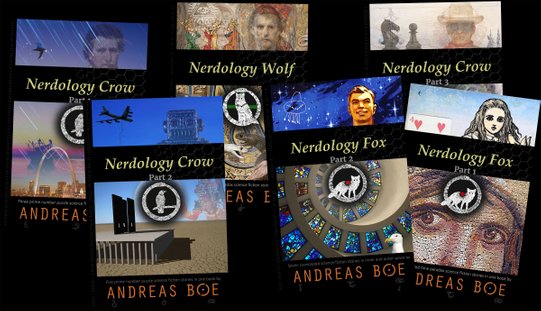 Mikko, John, Jeff and Chen are engineering students at Stanford University in California and they have been recruited by the Global Society to perform analysis work in virtual reality. This makes them guinea pigs for all kinds of forces and it makes their lives every bit as weird as the science fiction movies they watch. Because a lot of the action plays out in virtual reality, the stories can borrow lots of story devices from the fantasy genre without breaking any laws of nature. This should in principle make the series fit in the hard science fiction genre, but it stubbornly lingers on the border to it.

The adventures the four friends are pulled into are usually quite contemplative and philosophical and they contain lots of number puzzles and religious speculations, but there's lots of real action too. The four jacks themselves aren't hardboiled action types, but the challenges they meet often force them to employ the help of people who know their stuff.

The Nerdology series consists of thirty stories ov varying length divided into the three sub-series: Crow, Fox and Wolf. Crow is about the four engineering students. In Fox they have split up and pursues separate careers, and in Wolf they have all become fathers. The stories were originally published as twenty-one e-books, but are now available as six paperbacks with an average of 500 pages each. Even if the Wolf series comes last chronologically, it's still a good one to start with. It has a Christmas theme, so it's a good read in Deccember.